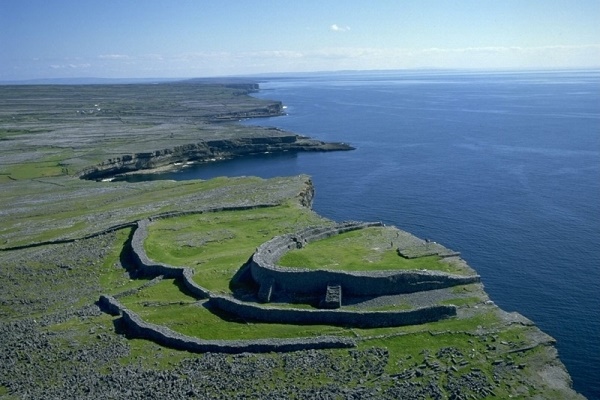 A true Irish experience awaits, locals speak Irish as well as English in a setting of Celtic churches of historical significance including World Heritage site Dun Aonghasa which is set on dramatic 300 ft cliff edge. The Aran Islands are a great choice for special holiday or break and has various accommodation options including Bed & Breakfasts, Hotels, Hostels, & Ireland’s newest Glamping Self Catering pods.

The Aran Islands are a group of three islands situated in Galway Bay, just about 45km off the coast of County Galway in the west of Ireland. These islands are very special places as they have remained one of the last remaining parts of the country, which still bear a very strong sense of Irish culture and language. The islands are ‘Gaeltachts’ (Irish-speaking areas) and their location has helped them to preserve and protect these traditions against foreign influences on the mainland down through the years.

The largest of the three island is Inish Mór which is just 12km by 3km in size and has a population of about 900 people. It is one of the most popular island destinations in Ireland. It’s of huge historical interest with over 50 different historic monuments dotted all over the island, the largest and most impressive being Dun Aengus.