The West of Ireland, has always being a bit of a back water for rock climbing. However over recent years, some great routes have been developed by some active local climbers including Carl Maddox, Paddy Gethings, Clement Quinn, Lisa Kennedy, Neal McAloon, John Connolly, Barry Smith, Lisa Milner, Michelle Casey and Henry Wilkinson to name just a few.

The dramatic, mountain and coastal landscape of Achill Island in county Mayo, has long been an attractive holiday destination. Achill has some of Mayo’s finest and most adventurous climbing, with over 90 sea cliff routes and 20+ mountain routes and scrambles Achill Island.

Mayo and Galway have a long developed history of mountain routes, the most famous being Carrot Ridge in the 12 Bens, Co. Galway. Several lesser know, but still good routes, exist throughout the two counties, including the long scrambles on Ben Bury, Quartzite lines in Achill, the quality sandstone slabs of Maumtrasna and other long routes in the 12 Bens and Maumturks.

Accessible crags and Bouldering are the most recent developments in Galway and Mayo. Achill Island now has routes over 100 meters just 5 mins from the car! Mweelrea and Killary harbour are surrounded by volcanic and gritstone crags, some of the highest quality. There’s also the accessible Erris Beg near roundstone and huge scope for Granite climbing and bouldering.

Offering probably the areas biggest new route potential, Mayo and Galway’s offshore islands offer everything from the accessible cragging in Clare Island, Remote adventure’s on the Inishkeas to the challenging and committing hard climbs of Inishturk.

Rock climbing is one of the safest and most thrilling outdoor activities there is. You can choose different levels of climbs depending on how much of challenge you would like, even if your a complete beginner there is something here for you. After your climb you can experience abseiling back down to the ground, the feeling of conquering your fear and stepping over the edge is one not to be missed.
Read More 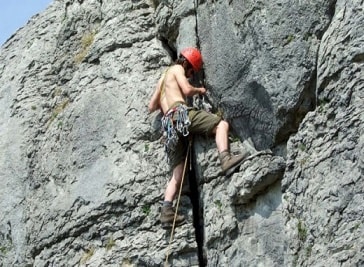 Outdoors Ireland Training School is a leading outdoor training, adventure and bushcraft company, with a small team of highly qualified and vastly experienced instructors; dedicated to providing the best service possible. We were the first adventure company in Ireland to achieve a gold environmental award and have a fantastic Trip Advisor rating! We are celebrating our twelfth year of operation this year, 2017...
Read More