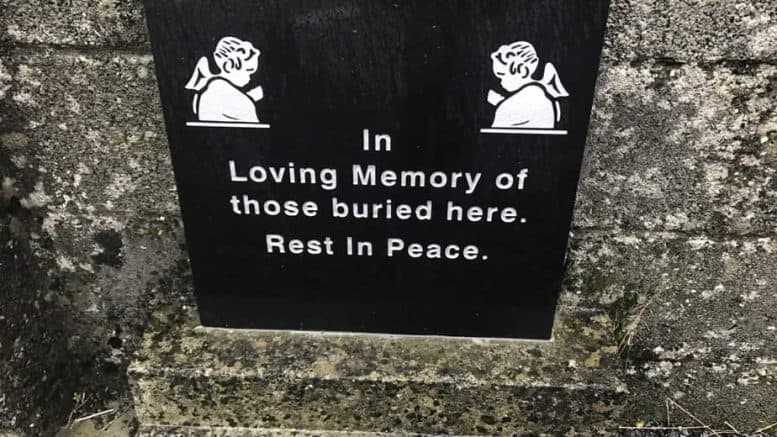 Galway Bay fm newsroom – The Vatican has expressed support for campaigners calling for a dignified reburial of the remains of hundreds of babies and children at the Tuam mother and baby home.

It’s believed that around 800 children may have been buried on the grounds of the former Bon Secours home between 1925 and 1961.

Rome’s ambassador to Ireland, Archbishop Jude Thaddeus Okolo, has told local historian and campaigner Catherine Corless that the remains of the babies and children buried at the site should be exhumed.

According to the Irish Daily Mail, he’s stated his support for the position of Archbishop of Tuam Michael Neary – that it is a priority that the remains be re-interred in consecrated grounds.

The latest development comes as a final report from a Government commission into Mother and Baby Homes has been repeatedly delayed – with another deadline having passed once again in recent weeks.

Previously, draft laws were announced which would allow for the excavation of remains, but the site on the Athenry Road remains intact several years later.

Catherine Corless has described the repeated delays as ‘cruel’ and says she wrote to the Papal Nuncio because she believes the Irish Government needs to be put under more pressure.

She says she’s delighted to have the support of the Vatican and that the situation isn’t going to just go away – with so many people in Ireland seeking answers and justice.

Ms. Corless says it’s not just about Tuam – but for all the missing babies whose remains have not been found, of which there could be thousands in total.

Go ahead for telecommunications structure at Salthill Knocknacarra GAA club

No deaths reported from COVID-19 today, 127 new cases nationally, at least one new case in Galway

Galway Bay fm newsroom – The Health Protection Surveillance Centre has today been informed that 3 people with COVID-19 have died. There has now been a total of 1,792 COVID-19 related deaths in Ireland. As of midnight Thursday 17 September, the HPSC has been notified of 253 confirmed cases of COVID-19. There is now a […] News – Galway Bay FM …

Galway people have been asked to support local and donate local by going ‘Up the Hill for Jack & Jill’ this October. Funds raised will go towards the home nursing care of Jack & Jill children around the country with highly complex medical and life-limiting conditions, including 23 children in Galway. The fundraiser is part of an SOS […] …