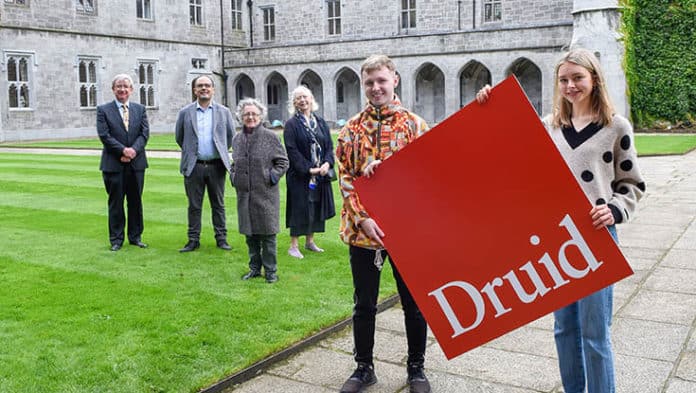 NUI Galway and the world renowned Druid Theatre have announced a ten year partnership to boost their creative arts collaboration.

This partnership will build on the long standing relationship between the university and theatre company, aiming to strengthen arts programmes, offer internships, and build on the international reputation for arts Galway already has.

Garry Hynes, founder and Artistic Director of Druid, said that for the past ten years, the Druid Academy at NUIG has been a source of “pride and inspiration” for all involved, helping students embark on a career in theatre.

“We are delighted to announce the next stage of this academic partnership, deepening the relationship between ourselves, the students and the wider academic community in NUI Galway, the place where Druid was founded in 1975.”

Several concrete commitments have already been made, such as a series of bespoke on-site performances and conversations.

The first of these was Druid Gregory, which took place outdoors in the University’s Quadrangle in September 2020.

The University will also host an exhibition to mark Druid’s 50th birthday and NUI Galway 180th anniversary in 2025.

Professor Ciarán Ó hÓgartaigh, President of NUIG said that the Druid Theatre is one of the great things to have started at the university.

“We have a great tradition here of the creative arts and this partnership with Druid renews this relationship and is very much embedded in our values.”

“When you ask why a student from Boston, Berlin or Beijing would choose to study in Galway, one aspect is the unique opportunity they have to learn with our world class creative organisations, including Druid.”

There will also be a focus on the NUI Galway alumni, partly through Druid’s international productions, as well bringing renewed visual presence for the creative arts company on campus.

Professor of Drama and Theatre Studies Patrick Lonergan said “Druid is not only an inspirational theatre company; it is also one of Galway’s most successful and resilient businesses.”

“Our students will learn from their example as they build their own creative arts enterprises, working in the west of Ireland, nationally, and internationally – just as Druid do.”

“We’ve already achieved so much from working together: the next decade of cooperation promises to be hugely exciting.”