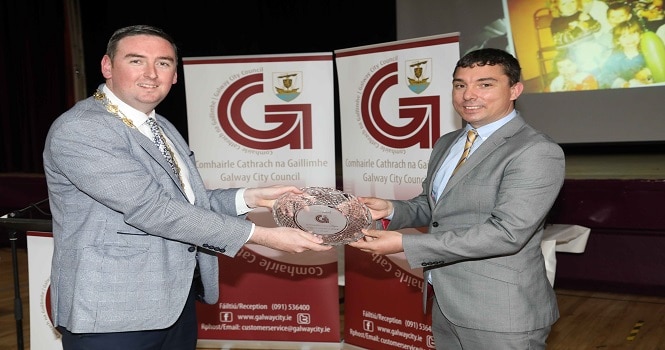 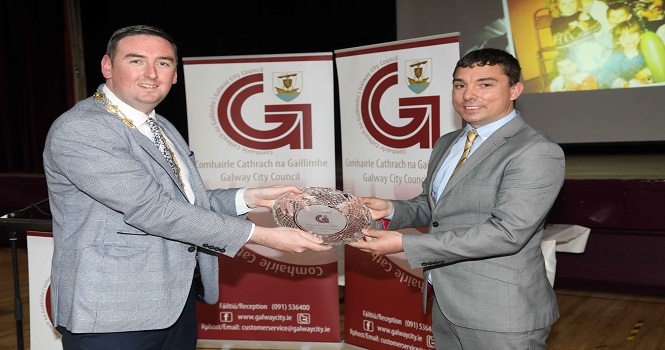 The achievements of NUI Galway student Owen Ward were celebrated at a special Mayoral reception at Leisureland in Salthill on Friday afternoon.

Owen, who is a Galway City native and member of the Irish Traveller community, left school early without a Junior Cert, but after completing the NUI Galway Access Programme he graduated from the University with a B.A. (Hons) and a Masters in Post Primary education.

Owen is a Programme Coordinator at the Access Centre, NUI Galway, and a Committee member of Údarás na hOllscoile – the first Irish Traveller to be elected to a university governing authority in Ireland.

Mayor of Galway City Cllr. Mike Cubard presented the graduate with a Galway Crystal Plate at the reception which was socially distanced and attended by a small number of people.

Cllr. Cubbard said: “Owen’s commitment to widening participation in higher education for students from diverse and socio-economic disadvantaged backgrounds has been remarkable.”

He also played a key role in the establishment of the University of Sanctuary scholarships at NUI Galway and was a co-founder of the Mincéirs Whiden Society with fellow Traveller students at the University.

Penneys to offer shopping by appointment before fully reopening

The most intimate Festival comedy at its best will happen at The Kings Head this July! The Kings Head has been a venue for lunchtime Comedy during Galway International Arts Festival for over 25 years. This July you can catch some of Ireland’s best comedians up close and personal in the intimate surrounds of The […] Galway Daily …

Berni reveals what Briain did to Andy, Bobbi Lee is fuming at Berni’s deception, and Mack wants Niall to let loose one last time in Ros na Rún. Berni tells Andy that Briain raped her, which is why she doesn’t want him to have anything to do with her child. Andy is out for blood, […] Galway Daily …

Galway Bay fm newsroom – A local councillor is slamming a decision by the department of education to reduce the number of teachers at Ballinderreen National School Councillor Joe Byrne says ‘bureaucracy has gone mad’ following the departments refusal to retain the current compliment of teachers for September. Last September the school submitted their enrollment […] Galway Bay FM …

A man refereeing a street fight, who instead ended up punching out one of the participants, got a jail sentence at Galway District Court. Michael McDonagh, of 6 Fana Glas, Ballybane, received a seven month prison sentence after pleading guilty to charges of violent disorder and assault causing harm. Garda Aidan Nally told the court […] Galway Daily …